Thump.  I remember that sound as plain as day—the sound my son made when he climbed out of his crib

for the first time.  He managed the feat easily, swinging both of his feet over the bars of his crib, dropping or slithering down the side, and landing without hurting himself.

But the thump I heard was definitely him hitting the floor.  I leapt at the sound and met him at the door of his room, as he came waddling toward my bedroom with a big grin on his face.  “Free at last!” his smile said to me.

Climbing out of the crib is a big moment for tots and the end of an era for their parents.  With their newfound freedom, twins can’t just be put to bed and be expected to stay.  So what do parents do when cribs can no longer contain their toddler twins?

For some parents, this event prompts a move to “regular” beds.  Other parents continue to use the cribs, but leave the sides down, so it is not so dangerous for them to climb out.  Other take out the crib mattresses

and put them on the floor so the danger of climbing is eliminated.  Cribs can be used for years—but most parents get rid of baby furniture long before their children reach kindergarten.

Replacing the furniture is the easy part.  The hard part is getting children to sleep when they are no longer physically confined.  If the going-to-sleep routine has been fairly easy all along, the lack of confinement probably won’t create problems once the children get used to the change.  But children who fight bedtime or have trouble settling down can make things hard for parents once they find themselves with freedom from crib bars.  What do parents to then?  It may take a period of constantly and patiently hauling the wandering child (or children) back to bed every time they get out.  It may seem to take forever, but most parents find that if they are consistent, their children do eventually learn to stay in their beds.

Some parents find that it helps to put their children to sleep in a very routine way at the same time every night so the children are used to the regularity.  Others look for signs of sleepiness and put them down then.  Both the by-the-clock parent and the on-demand parent may use a bedtime ritual designed to settle the children down and give them the message that it’s sleeping time.  Usually, rituals are created jointly by parent and children and may include music and a story.  But they may vary, even within the same family.  “Tickie!” demands Shelby, thrusting a foot in her mother’s face. Since she learned to climb out of her crib at about age 18 months, she’s found she can enjoy her mother for a longer period of time in the evening.  Now she’s allowed to stay up a bit after bath, jammies and tooth brushing so she can snuggle on the couch.  When she asks for her foot massage, it means she’s starting to get sleepy.  Her mother knows the pattern well and scratches the sold of her daughter’s foot until she notices Shelby start to play with her fingers, stroking them very gently—always an indication that it’s time for sleep.  Her mother gets up and puts her into her bed, and then sits with her a short time, scratching her feet until Shelby, predictably, drops off.

Amanda, on the other hand, who hasn’t yet learned to climb out of the crib, snuggles nightly with her daddy and a special blanket while her twin sister, Shelby is getting her “tickie”.  IT’s easy to put her into bed after the snuggle because she goes right to sleep with her thumb and her “blankie” to help her along.  She has her own comfort devices and doesn’t need adult help usually, though she does enjoy a foot massage, too, now and then.

Children have their own ways of getting to sleep.  For a few children, it’s easy.  All they have to do is get into a horizontal position when tired, and their eyes close just like a doll

.  But most need more than a horizontal position. Many have developed self-soothing skills.  Shelby strokes her fingers; Amanda sucks her thumb.  In addition, Amanda has a comfort device—her “blankie”.  Other common comfort devices are special pillows or stuffed animals.

Toddler twins who have slept in separate cribs may choose to sleep together once they can get to each other.  If this arrangement is disruptive to the children’s sleep or is otherwise not in the children’s best interest, parents may choose to teach their twins to sleep apart through gentle training and constant insistence that they get back in their own beds.

Once toddlers have the ability to climb into their parents’ bed on their own, many will often do so.  If parents want to keep their bed a “no-kid-zone,” then it’s important for them not to be wishy-washy about this rule.  Bedtime conflicts can trigger enormous power struggles if parents become too “heavy-handed” when dealing with their toddler twins.  It’s important that when parents put their children back to their own beds, they reassure them that they’re not being abandoned.  The children need to know that the parent is still close by.  It may take continual reassurance and reminders on the part of the parent, however, before children finally soothe themselves and fall asleep.

Problems getting toddlers to bed

and keeping them there often have more to do with parental attitude than the techniques they use.  A parent who has been gone all day may have some internal conflict about making his children go to bed instead of spending time with them.  Even though this parent may be firm about bedtime, the children pick up on his ambivalence and react to it by resisting sleeping.  The parents who have the easiest time getting children to sleep are those who are sensitive to their children as individuals and are clear about their need for sleep.

It becomes especially difficult to deal with bedtime when toddlers are over-tired.  An evening out can disrupt sleeping schedules and make bedtime extra hard.  Or if parents miss the signals that it’s time to put a child to bed, they may find that he has gotten wound up and may be hard to settle back down.

Some children stay up until they drop from exhaustion because no one reads their earlier cues.  Timing is critical when it comes to putting children to bed.

Persistence is also important.  A firm but gentle insistence on “back in bed” is the way to deal with the questions, “What do I do when they learn to crawl out of their cribs?”

Keeping them Cozy in their Cribs 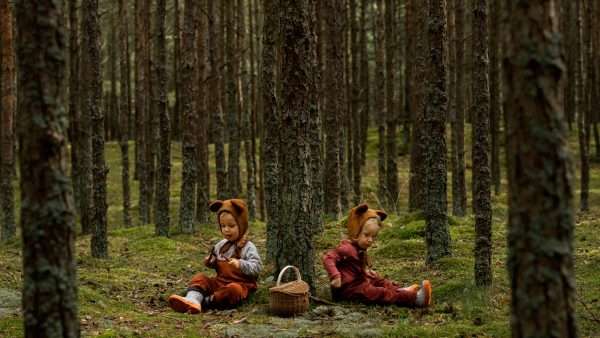 What parents of twin toddlers need to know

By Janet Mena-Gonzalez Thump.  I remember that sound as plain as day—the sound my son made when he climbed out […]
By Twins MagazineDecember 16, 2016